There are places that you will deeply love from the very first time. Places in which you will leave a piece of your heart and soul. We do not know exactly when that spark happens, but when it does, we certainly know that it will be there forever. To us, but probably also to you, one of those places is Lake Garda.

A large lake characterized by different climates and landscapes and which perhaps thanks to this peculiarity has been loved by people of all origins since ancient times. A place where many fell in love for the first time or met the love of their life. Maybe it happened to you too and maybe you are even among those who got married here…

With that being said, there couldn’t be a better time to launch our blog than in occasion of love and Valentine’s Day. The legends behind this holiday are more than one, but today we choose to share this story with you, one that teaches us a lot about love, sacrifice, commitment and the true essence of Valentine’s Day.

It all started in 3rd century, when the Roman Empire was ruled by Emperor Claudius II Gothicus, also known as Claudius the Cruel because of his ruthless leadership and his need to make war. Claudius aspired a large and motivated army. The problem, however, were the young Romans who for some reason preferred staying with their loves and families instead of going to war for an emperor who called himself the Cruel. And so, the empire had a lot of trouble finding enough men for its armies.

In an attempt to overcome this “laziness” problem, Claudius forbid all marriages and engagements in Rome. Thousands of couples saw their hopes of celebrating their sacred marriage dashed. And for some time, no one seemed to have the courage to protest against this law. This situation changed when a simple Christian priest named Valentine took a stand to defend love and continued to secretly celebrate the sacred marriage. When Valentine’s actions were discovered, Claudius did what tyrants do and ordered that he be put to death.

This legend also tells that while Valentine was awaiting execution, he fell in love with the jailer’s daughter. On the eve of his execution, with no writing utensils available, Valentine is said to have left her a note, and wrote her the words “From your Valentine”, with the juice he squeezed from flowers. Words that still characterize the cards we exchange on Valentine’s Day.

The story of Valentino, a man with a big heart and who gave his life in the name of love, remained a legend in Rome even after centuries. For this reason, Valentino was proclaimed Saint.

As we have already mentioned at the beginning, there are several legends concerning this holiday. One thing that they have in common is the choice to celebrate this occasion in the middle of February. A choice made not by chance as it is precisely in this period that the mating of the lovebirds begins. Reason why even today, couples in love take the nickname of “lovebirds“. 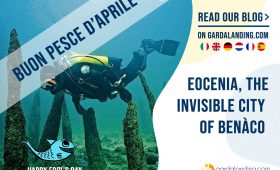 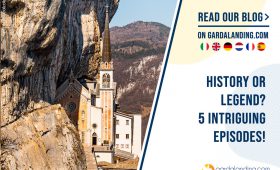 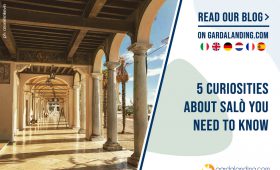 Lake Garda is full of picturesque places and so, today we decided to make a ranking of some truly romantic locations! Whether you love cycling, mountains, romantic lights or breathtaking views, in our TOP 10 you will find the right ideas to celebrate Valentine’s Day or any other lovebird moment.